Ethiopia's population is highly diverse, containing over 80 different ethnic groups. Most people in Ethiopia speak Afro-Asiatic languages. In this article we’ll explore some of the tribes and what makes them unique culturally. 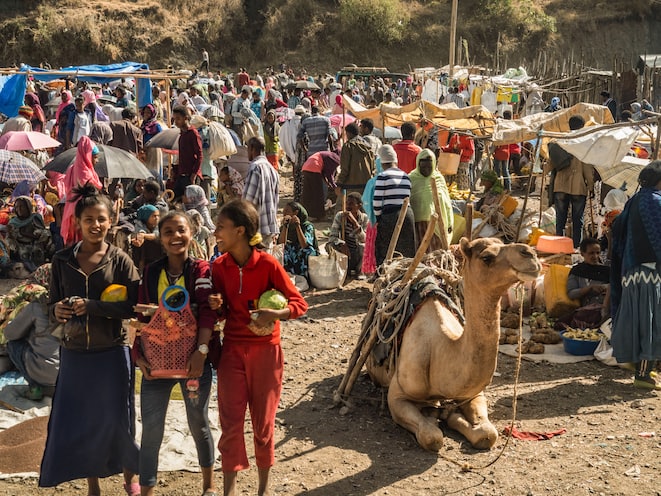 Ethiopia's population is highly diverse, containing over 80 different ethnic groups. Most people in Ethiopia speak Afro-Asiatic languages. In this article we’ll explore some of the tribes and what makes them unique culturally.

The Hamer is one of the most traditional and ancestral villages in Ethiopia. They are an African ethnic group that lives in the south of this country, east of the Omo River, near the border with Kenya. They subsist on agriculture and pastoralism, but they have also added another activity that gives them not only economic wealth but cultural and social wealth: markets. The women of the Hamer tribe wear hair impregnated in ocher mud, with braids usually and hairstyles adorned with feathers. The most characteristic of their clothing is the large necklaces and stripes made with seashells. And so, ornaments distinguish a married woman from a single woman.

In the rainforest of southwestern Ethiopia, in huts built with branches, is one of the most warrior tribes in the region, the Surma. Ethiopian semi-nomadic tribe. It is common to make scarifications, men as a show of struggle and strength and in the case of women, for aesthetics. In addition, clay plates are embedded in lips and ears while it is considered that the larger this dish is, the greater the beauty, they can be up to 40 centimeters in diameter. It is a body ornament that women wear on the lips and ears, once these areas of the body are dilated. It has its importance at the time of marriage: the larger the dish that the bride carries, her family will have the opportunity to ask for a greater dowry, usually consisting of cattle heads.

The Mursi is one of the most attractive Ethiopian tribes. Known for their warrior and aggressive spirit. They live in the Omo Valley. They maintain the Dunga, a festive battle between young people in which the warriors who obtain the victory obtain the right to choose a wife and the respect of the opponents. Mursi women wear clay or wood plates embedded in their lips and ears, as are also amazing hairstyles with ornaments such as metal rings and various fabrics. The men wear spectacular drawings painted with white chalk all over their bodies. Both men and women decorate their bodies with natural pigments extracted from minerals and vegetables, which also helps them as an insect repellent when mixed with ash and urine from cattle. It is also very common that scarifications are made, especially in arms, chest, and back, as a sign of elegance, strength, and courage.

Dassanech are divided by clans, 8 specifically, and according to the ancestor they come from, they will belong to one or another clan. They have a patriarchal structure and therefore, above all these clans, there is a group of elders called the areas, that is, the authority. Women always wear the upper part of the body naked, wear a type of foulard or brightly coloured fabric that curls at the waist and goes barefoot. Their ornaments are very peculiar: most have small perforations under the lower lip that decorate with colourful detail, such as feathers. They usually carry on the head: bullet caps, zippers, badges and other equipment that is normally difficult to find in those lands and that is why they consider valuable and aesthetically well regarded. On the neck, they usually wear brightly coloured necklaces. Yellows, oranges or reds are the most used, probably for referring to the sun and for going according to the warm climate of their lands. They are also worn on the wrists and ankles.